Posted on August 8, 2014 by Montacute Pavilion

Gardens are the acid test of sculptural genres. One popular genre is the overscaled object, such as the giant milk crate currently proposed as a public sculpture in Sydney. The Sydney Morning Herald tracked down the designer of the original milk crate (see link below). It is interesting how this interview never mentions the difference in size between sculpture and original. From the art point of view the change in scale is everything. Equally interesting is the way the artistic justification for the ‘over-scaled everyday object as work of art’ has dropped out of sight. I think the first person to do this was Claes Oldenburgh, and in everything I ever read about him the ‘justification’ was essentially its place in the triumphant march of American modernism. But where does it leave things today when the OSEOAWOA has become a regular genre? One commentator asked what was the difference between this and the ‘giant pineapple’ or ‘giant wool bale’. Quite so. Insofar as there is one, it lies in the audience to which it is addressed. The giant pineapple/wool bale is a simple celebration of the dominant product of a district. The giant milk crate is not. By being labelled ‘sculpture’ and ‘art’ it is situated, notionally if not physically, in an art gallery, which situation, custom dictates, means that it is to be understood as an ironical commentary on contemporary urban life. Or something ….

This prompts a thought experiment. Suppose that the giant milk crate is situated on the site of the original plastics factory that produced them. Then it would be part art, part heritage monument, a statement by us, now, about us/them, then. But now suppose that the factory is still operating. Then it would be just a shop sign or giant pineapple. And notice how, in our post-Duchampian world, no-one, least of all the original designer, makes a claim for aesthetic value. There is none of the shakerish worship of the humble industrial artefact as beautiful object. And that is the curse of Duchamp. Once we shake off the arid demand made by the situation to respond to it as ‘art’, we are left only with scale. The giant pineapple may actually have more to offer. The concept may be trivial, or at least simple, but there is nothing wrong with that. It is the execution that is everything: the way the pineapple has been translated into sculptural form. A good example of this is the Dunmore Pineapple, a fabrique in the form of a pineaple at Dunmore Park in Scotland. But the Duchampian milk crate denies us aesthetic pleasure.

And this provides us with the social key to the differences between the works. An inner city latte-sipping trendoid has been educated to valorise the Duchampian mode over all others. Those not so educated are more likely to be operating in the aesthetic mode. If the audience’s aesthetic calibration is fine, the giant pineapple is either repulsively crude, or an object of wonder, depending on the quality of execution of the object and the quality of the interpretation of the pineapple-idea. But if their calibration is crude, then the pineapple-as-aesthetic-object collapses into being just a giant pineapple, in the same way that the giant milk-crate is—and can only be—just a giant milk crate. 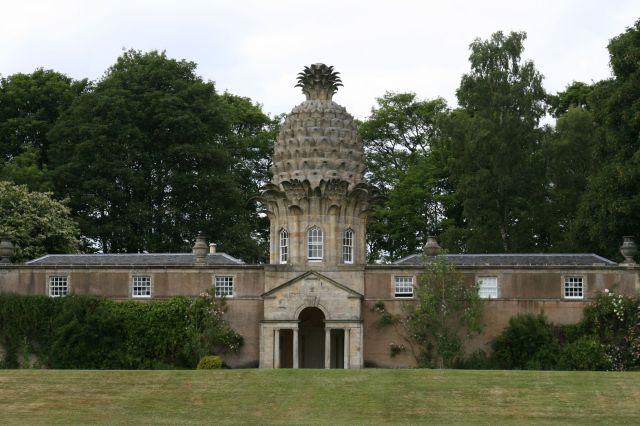