Some Remarks on Panini, Piranesi and the Campidoglio

Posted on February 9, 2019 by Montacute Pavilion

In 1761 Giovanni Battista Piranesi produced, as one of his Vedute di Roma, one of the more unusual representations of the Campidoglio, The Campidoglio from the side (Fig. 1).[1] Piranesi normally did his designs from scratch, and in this case we have his preparatory drawing in the British Museum (Fig. 2) which has a few differences, such as the sliver of a building at the right edge that appeared in early states of the etching. It has been argued that Piranesi wanted to foreground the so-called Trofei di Mario on the parapet, which he had published in detail in 1753 in I Trofei di Ottaviano Augusto.[2] According to Piranesi these trophies commemorated the victory of Augustus over Mark Antony at the Battle of Actium in 31 BC, but they were in fact features of the castellum of the fountain of Alexander Severus located in the modern Piazza Vittorio Emanuele II, and were moved to the parapet of the Campidoglio in 1590. The castellum is shown with the trophies still in situ in an engraving by Etienne Dupérac (Fig. 3),[3] and as it was in Piranesi’s day in another of the Vedute di Roma, the Fontana del’Acqua Julia. (The aqueduct that served it is now thought to be the Aqua Claudia or Aqua Anio Novus.) 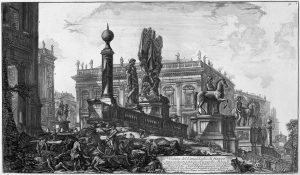 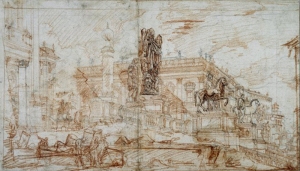 Fig. 2. Piranesi, Study for View of the Campidoglio from the side. British Museum. 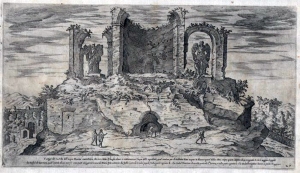 Piranesi centred his composition on the left-hand trophy, which in the drawing is given added emphasis. In order to show it from an impressive angle he chose a low position on the area of uneven ground between the staircase of S. Maria in Aracoeli and the Cordonata of the Campidoglio. By observing features in the foreground and background that are aligned and plotting these on the Nolli map of 1748 one can deduce the viewpoint out the sightlines (Fig. 4). These indicate a viewpoint on the terrace in front of S. Maria in Aracoeli, but this is considerably higher than the Campidoglio terrace, so the viewpoint must in fact have been at the foot of the wall of the staircase, behind the Roman building, roughly at the point indicated in Piranesi’s view of the Campidoglio and S. Maria in Aracoeli (Fig. 5). (The difference is probably within the margin of error for sightline alignments.) 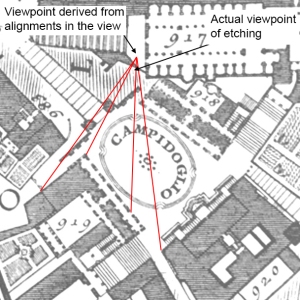 Fig. 4. Sightlines of Piranesi’s etching drawn on the Nolli map of 1748. 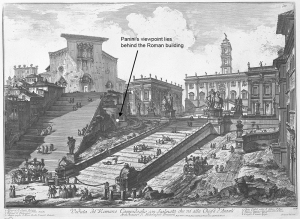 Fig. 5. Piranesi, View of the Campidoglio and S. Maria in Aracoeli.

Panini did paint views of the Campidoglio, although rarely. The prime version is the ex-Farnborough Hall painting sold a few years ago in New York, which is signed and dated 1750, which adopts the traditional frontal viewpoint (Fig. 6). (See my discussion in the catalogue of the Christie’s sale, in New York in 2013.) [4] This was preceded by the view in Nolli’s map of Rome (Fig. 7) of 1748. In both the relationship between the parapet statues and the Palazzo Nuovo correspond closely, but the rest does not, which points to additive viewpoints and manipulations of perspective. The actual construction of the ex-Farnborough Hall painting needs further exploration. 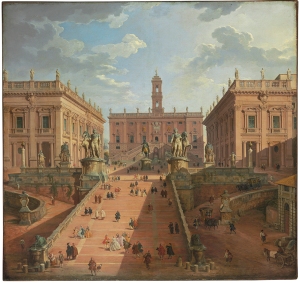 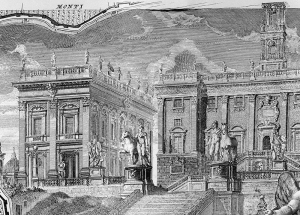 The only time Panini does something approaching Piranesi’s oblique viewpoint is in a fictive painting on the left side of the Stuttgart Roma Antica of 1756/57 (Fig. 8).[5] Because this painting shows ancient Roman monuments, the modern ones being found in the companion picture, the Boston Roma Moderna, the subject of this fictive picture is the Campidoglio, but the antique statues of Castor and Pollux on the parapet which have due prominence from this angle. This is confirmed by the fictive painting above and to the left that shows the (ancient) Quirinal Horsetamers from a similar angle, with the (modern) Quirinal palace behind scarcely visible. In other words, whereas Panini adopts an oblique view (but from the right) to prioritise Castor and Pollux, Piranesi eleven years later adopts an oblique view from the left to prioritise, and place at the exact centre of the composition, one of the Trofei di Mario. In the Metropolitan Museum version of the Roma Moderna (but not the Boston or Louvre versions) Panini does include the Campidoglio (Fig. 9), but seen from the front, which serves to emphasise Michelangelo’s façade of the Palazzo Senatorio, causing the statues of Castor and Pollux to sink into its façade, and part of the Palazzo Nuovo. This view seems to be based on the Farnborough Hall picture, but with adjustments to the perspective. 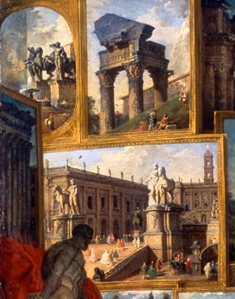 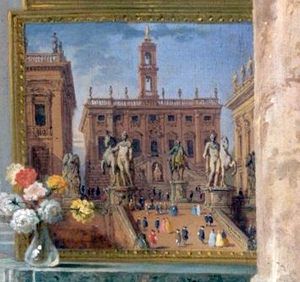 [5] There is a painting in a private collection attributed to Panini of the oblique from the left, but this is clearly based on Piranesi’s etching.